✔
DEFENSE MODIFIERS
Resist 5 Acid (Ooze), +2 Fortitude (Hybrid), +2 Reflex (Hypercognitive)
1
Action Points
+14
Initiative
6
Speed
SKILLS
+5
Education
+2
Esoterica
+4
Fitness
+8
Intimidate
+6
Mechanics
+6
Perception
+2
Resources
+8
Skulduggery
+9
Social
+7
Survival
ATTACKS
1d8 + 6
+9 vs AC
Nunchaku (Melee 1, Accuracy 3)
1d8 + 6
+9 vs AC
Shuriken (Ranged 5, Accuracy 3)
The Anatomist's Friend
Omega
For use in controlled laboratory conditions ONLY. Do not expose to slaads. Use in necromancy strictly prohibited.
Encounter ♦ Shadow, Transmutation
Standard Action ♦ Ranged 5
Target: Two creatures within range. These creatures must also be within 5 squares of each other, and have clear line of sight to one another.
Attack: Intelligence + Luck + level vs Fortitude
Hit: 3d8 - Luck physical damage (use the Luck modifiers of the targets). An internal organs will be swapped between the two targets. Roll 1d20 to identify the affected organ.

Overcharge: When you use this tech, you can roll a d20.

10+: You may choose to waive the 3d8 damage caused by the procedure (damage due to gross anatomical incompatibility may still occur).

9 or less: It seems as though you've become one of your own test subjects. Uh-oh.


Lizard Pheromones
Alpha
There are several other verbs to attend to before you can walk the dinosaur.
Encounter ♦ Primal
No Action ♦ Ranged 10
Benefit: You are irresistibly attractive to all reptilian creatures. All reptiles within range must do everything within their power to get closer to you, provided the action required to do so would not be obviously lethal to them.
Overcharge: When a reptile enters range, you can roll a d20.
10+: For the rest of the encounter, at the beginning of your turn you may toggle the pheromone effect for each reptile in range. Available settings are On, Off, and Reverse.
9 or less: All reptiles in range have double speed. 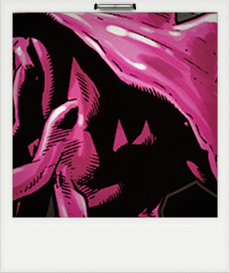 19
Armor Class
16
Fortitude
18
Reflex
15
Will
RACE
Cyberjelly
Ability Bonus: +2 to Constitution.
Skill Bonus: +2 Skulduggery, +2 Survival.
Acidic: Resist Acid 5 + 1/2 level
No Bones: Ignore the first 30 feet when determining fall damage.
Oozekind: Once per encounter, you can use either the Engulf or the Slime Sneak power.
Living Construct: You are a living construct. You do not need to eat, drink, breathe, or sleep. You never make Survival checks to resist the effect of starvation, thirst, or suffocation.

MUTATION
Hypercognitive
Primary Ability: Wisdom
Psionic: +2 to Psionic overcharge.
Skill Bonus: +4 to Social.
Random Skill Bonus: +4 to Intimidate.
Defense Bonus: +2 to Reflex.
Unsurprisable: +8 to Initiative.
Hypercognitive Critical: When you score a critical hit, the attack deals 1d10 extra damage, and you and an ally within 5 squares of you gain +2 to all defenses until the end of your next turn.

BACKGROUND
Failed Experiment
Flopflap is just one of many half-baked exercises in nano-augmentation to be flung from the Malboro labs into URBX in a bid to recoup expenses.
Level 1: Gain the What Does This Button Do power.
Level 2: Gain the Reroute To Subroutines power.

Fight Like Crazy
Feat
You may wield a one-handed weapon in your off hand. Gain 5 additional hit points.

Assassin's Shroud
Assassin Feature
Have you ever even used this?
At-Will ♦ Shadow
Free Action ♦ Close Burst 10
Target: One enemy you can see in burst
Effect: You subject the target to your shroud. If any of your shrouds are already on the target, you subject it to an additional shroud, up to a maximum of four. The shrouds last until you use this power against a different enemy or until the end of the encounter. Before you make an attack roll against the target, you choose to invoke either all your shrouds on it or none of them. If you invoke your shrouds, the attack deals 1d6 damage per shroud, minus one shroud if the attack misses, and all your shrouds then vanish from the target. This damage roll never benefits from bonuses to damage rolls, and is in addition to the attack's damage, if any.

Special: You can use this power only on your turn and only once per turn.

Hunter's Quarry
Ranger Feature
Seriously, I don't remember.
At-Will
Minor Action
Effect: Once per turn as a minor action, you can designate the nearest enemy to you that you can see as your quarry. Once per round, when you hit your quarry with an attack, the attack deals damage based on your level. If you can make multiple attacks in a round, you decide which attack to apply the extra damage to after all the attacks are rolled. If you have dealt Hunter’s Quarry damage since the start of your turn, you can’t deal it again until the start of your next turn. The hunter's quarry effect remains active until the end of the encounter, until the quarry is defeated, or until you designate a different target as your quarry. You can designate one enemy as your quarry at a time.

Uncanny Strike
Hypercognitive Novice
Thanks to my powerful intellect, I knew that the man I stabbed would try to kill me.
At-Will ♦ Psionic. Physical, Weapon
Standard Action ♦ Melee or Ranged weapon
Target: One creature
Attack: Wisdom + level + accuracy vs. AC.
Hit: 1[W] + Wisdom + level physical damage, and the target grants combat advantage until the end of your next turn.

Engulf
Ooze Racial Power
You're not ready for this jelly.
Encounter ♦ Primal, Acid
Minor Action ♦ Melee touch
Target: One creature grabbed by you
Attack: Dexterity + level + 2 vs. Fortitude
Hit: 1d6 + Constitution acid damage, and the target is dazed until the end of your next turn.

Slime Sneak
Ooze Racial Power
Squish.
Encounter
Minor Action ♦ Personal
Trigger: You are hit by a close attack or a melee attack.
Effect: You assume the slime sneak stance. Until the stance ends, you gain a +5 bonus to Skulduggery and have concealment. Making an attack ends the stance.

Effect: Until the end of the encounter, you gain a +2 bonus to attack rolls against the target while your shrouds are on it.

What Does This Button Do
Failed Experiment Utility
The shiny, candy-like button!
Encounter ♦ Elemental
Free Action ♦ Ranged sight
Trigger: You or an ally you can see spends an action point to make an attack.

Effect: After the attack is resolved, roll a d6. The triggering character gains the resulting benefit.

1. The character gains a +2 power bonus to attack rolls until the end of your next turn.

2. Until the end of your next turn, the target of the attack takes 2 extra damage each time it is hit with an attack.

3. The character gains a +2 power bonus to speed until the end of your next turn.

4. Until the end of your next turn, the target of the attack grants combat advantage.

5. The character can make a basic attack as a free action.

6. Until the end of your next turn, the target of the attack cannot shift.

Reroute to Subroutines
Failed Experiment Utility 2
All power to that thing that we don't know what it does!
Encounter ♦ Elemental
Free Action ♦ Personal
Trigger: You use What Does This Button Do.

Effect: You lose a healing surge, and you can choose the result of your d6 roll.