10+: Extend the range of Ultimate Frisbee to 20. You may add an additional target within range.

9 or less: Looks like the stabilizers are busted. Reduce the range of Ultimate Frisbee to 2.


Oily Coat
Alpha
Good gracious, how sebaceous
Encounter ♦ Primal
No Action ♦ Ranged 10
Benefit: You're very slippery. When you move, you can choose to move at double your normal speed. If you do so, immediately fall prone at the end of your move. You can pass through an enemy's square when moving in this way; if they are Medium size or smaller, they are also knocked prone. If your move would end in an enemy-occupied square, instead choose an unoccupied adjacent square. In addition, enemies attempting to grab you suffer a -2 penalty.
Overcharge: When go slip slidin' away, you can roll a d20.

10+: You can remain standing at the end of your movement. If you end your move adjacent to an enemy, you may make a melee basic attack as a free action.


9 or less: Much too slippery! When you reach the end of your movement, continue sliding in the direction of your last movement until you reach a wall or other solid obstacle. 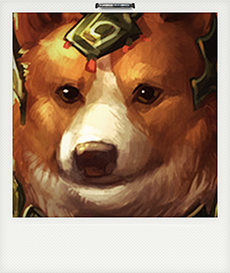 CLASS
Warden
Primary Ability: Strength
Primal: +2 to Primal overcharge.
Defense Bonus: +1 Fortitude, +1 Will
Lifespirit: When not wearing heavy armor, you can use your Wisdom modifier instead of your Dexterity or Intelligence modifier to determine your AC. When you use your Second Wind, an ally within 5 squares may recover HP equal to their second wind and make a saving throw.
Nature's Wrath: Once during each of your turns, you can mark each adjacent enemy as a free action. This mark lasts until the end of your next turn.

Eager Advance
Feat
+4 to speed during the first round of an encounter.

Trigger: An enemy marked by you makes an attack that does not include you as a target.

Hit: 1[W] + Strength modifier + level physical damage, and the target grants combat advantage to you and your allies until the end of your next turn.

Warden's Grasp
Warden Feature
The jaws that bite, the claws that catch!
At-Will ♦ Primal
Immediate Reaction ♦ Close Burst 5
Target: The triggering enemy
Trigger: An enemy marked by you that is within 5 squares of you makes an attack that does not include you as a target.

Effect: You slide the target 1 square. The target is slowed and cannot shift until the end of its turn.

Tyrannosaur Charge
Saurian Novice
More of a rapid tumble than a charge, but your heart's in the right place.
At-Will ♦ Primal. Physical, Weapon
Standard Action ♦ Melee weapon
Effect: Move up to 6 squares and make the following attack.
Target: One creature
Attack: Strength + level vs. AC
Hit: 1[W] + Strength modifier + level physical damage. If you moved at least 2 squares during this action, you also push the target 1 square.

Warden's Sacrifice
Warden Attack 1
Gather 'round while these skeletons punch me.
Encounter
Standard Action ♦ Melee weapon
Target: One creature
Attack: Strength + level + accuracy vs AC
Hit: 2[W] + Strength + level physical damage. Until the end of your next turn, when any enemy hits you, an ally within 3 squares of you gains 5 hit points.
Lifespirit: Add your Wisdom modifier to the hit points gained by your allies.

Form of the Swamp Hunter
Warden Attack 1
Haters get gatored.
Encounter ♦ Primal, Polymorph
Minor Action ♦ Personal
Effect: You assume the guardian form of the swamp hunter until the end of the encounter. While you are in this form, you gain swamp walk, a swim speed equal to your speed, and a +2 bonus to attack rolls against immobilized creatures. In addition, when you reduce any enemy marked by you to 0 hit points with an attack, you mark one enemy within 5 squares of you until the end of your next turn. Once during this encounter, you can use the Form of the Swamp Hunter Attack power while you are in this form.

Requirement: The power Form of the Swamp Hunter must be active in order to use this attack.

Iron Werewolf Charge
Iron Werewolf Attack 1
Let's do this for Johnny! And Johnnies 2-15!
Encounter ♦ Martial, Primal, Fear
No Action ♦ Close Burst 2
Trigger: You hit an enemy with a charge attack.

Effect: That enemy takes 1d6 extra damage from the triggering attack, and you make the following attack.

Attack: Strength + level vs. Will

Hit: You push the target up to 2 squares. The target takes a -2 penalty to attack rolls until the end of your next turn.

Giving 110%
Iron Werewolf Utility 2
Not a problem, I think I've got two of those.
Encounter ♦ Martial, Primal
Minor Action ♦ Personal
Effect: Until the end of the encounter, whenever you make an Athletics check or an Endurance check, you can roll twice and use either result.