9 or less: This one's expired. Take 5 damage, and you're dazed and slowed (single save ends both).


Spontaneous Monotreme Generation
Alpha
Dungeons & Dragons & Knuckles!
Encounter ♦ Primal, Beast
No Action ♦ Personal
Benefit: Whenever you miss an attack, a Small-sized monotreme is generated in a space adjacent to you. Decide the variety of monotreme and the space it occupies at the time of its generation. If there is no empty space adjacent to you, monotreme generation does not occur. The monotreme will be very confused by this event and is in no mood to attack anybody, so don't ask. At the beginning of your next turn the monotreme will do its best to flee for safety.
Overcharge: When you create a monotreme, you can roll a d20.

10+: You generate 8 monotremes instead, completely surrounding you.


9 or less: You retroactively become a monotreme, changing the past and badly upsetting your parents. 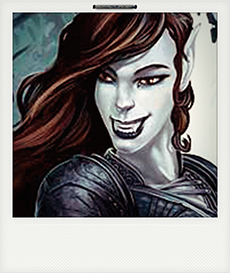 21
Armor Class
14
Fortitude
16
Reflex
17
Will
RACE
Vryloka
Ability Bonus: +2 to Charisma.
Skill Bonus: +2 Perception, +2 Skulduggery.
Defense Bonus: Resist 5+ 1/2 level Necrotic.
Exsanguinated: When you're bloodied, gain 2 HP less from healing effects.
Just Naturally Pale: +5 to Social when attempting to pass as Human.
Living Dead Girl: If an effect applies to you which treats the living and the undead differently, choose how the effect should treat you.

CLASS
Vampire
Primary Ability: Dexterity
Shadow: +2 to Shadow overcharge.
Defense Bonus: +1 Fortitude, +1 Will; +2 AC if wearing light armor and no shield.
Child of the Night: You can see just fine in the dark, and you don't need to breathe. Vulnerable 5 Radiant. Take 5 Radiant damage every round your skin is exposed to direct sunlight. If this damage knocks you unconscious, you're dust.
I Endure: When you're bloodied, gain regeneration equal to your Charisma modifier. Radiant damage disables this regeneration until the end of your next turn.
Stronger Than I Look: Add your Charisma modifier to damage dealt by powers granted by the Vampire class.

BACKGROUND
Outlaw
Esperansita lives a life on the run, marked for death by a powerful cabal of elven aristocrats.
Level 1: Gain the Surprise! power.
Level 2: Gain the Just Leaving power.

Sickening Finish
Feat
When you reduce an enemy to 0 hit points, gain +1 to all defenses until the end of your next turn. Hit: 1d6 + Charisma modifier + level psychic damage, and you pull the target up to 3 squares.

Vitality Transfer
Empath Novice
Just gonna go ahead and swipe that.
Encounter ♦ Psionic
Standard Action ♦ Ranged 3
Target: One creature
Attack: Charisma + level vs. Fortitude
Hit: The target is weakened until the end of your next turn. You or one ally within 5 squares of you gains hit points equal to your Charisma modifier.

Lifeblood
Vryloka Racial Utility
Having a great time, wish you weren't here.
Encounter
Free Action ♦ Personal
Trigger: You kill or bloody an enemy.
Effect: You shift up to your speed, OR you gain hit points equal to 5 + 1/2 level, OR you gain +2 to attack rolls until the end of your next turn.

Swarm of Shadows
Vampire Attack 1
Suddenly, bats! Thousands of them!
Encounter ♦ Shadow, Teleportation, Weapon
Standard Action ♦ Close blast 3
Target: Each enemy in the blast
Attack: Dexterity + level + accuracy vs. Fortitude
Hit: 3d6 + Dexterity modifier + level physical damage, and ongoing 5 physical damage (save ends).
Miss: Half damage.
Effect: You teleport to a square in the blast and are invisible until the end of your next turn.

Surprise!
Outlaw Attack 1
It's funny because serious brain damage.
Encounter ♦ Martial
No Action ♦ Special
Trigger: When using a basic attack or an at-will weapon attack power, you hit an enemy that is granting combat advantage to you.

Effect: The enemy is dazed until the end of your next turn.

Just Leaving
Outlaw Utility 2
Late for an appointment, wouldn't you just know it.
Encounter ♦ Martial
Move Action ♦ Personal
Effect: You shift one square, then move up to your speed. If you end your movement in a square with partial cover or partial concealment, you can make a Skulduggery check as a free action to hide from nonadjacent enemies.